– A first-person account of Taka Tamut, the 9th person from Arunachal Pradesh, India, who scaled the  world’s highest peak 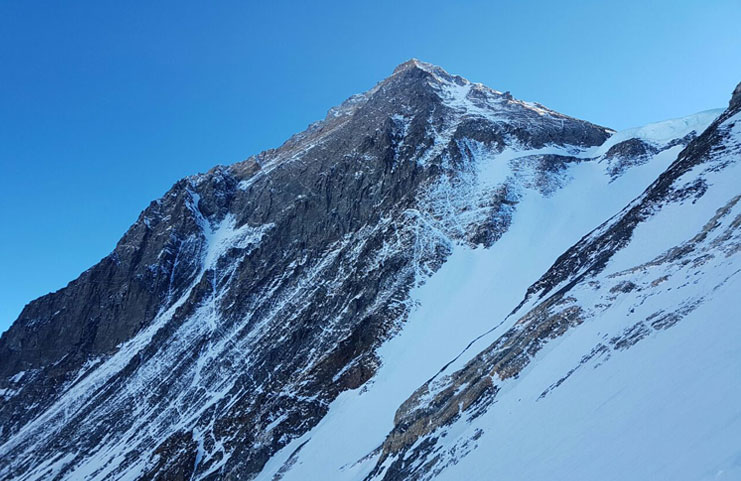 It was like a specter arose in front of my eyes. I then knew – it was my fear. There we were, 6,500 meters above sea level, climbing from camp 2 to camp 3 and my Sherpa was injured. Who can curse a falling rock, when we’re in the midst of nature and at its mercy? Our Sherpa was wounded, and my teammate, Kishon, and I had to decide on the next steps. A helicopter answered our radio for help and rescued our Sherpa. What should we do now? Should we turn back or inch our way towards camp 4, the proverbial death valley and attempt the Everest summit? It had been a long journey for me. A 26-year-old civil engineer from Jomlo Mongku in Siang district of Arunachal Pradesh to scaling Mount Everest, the highest peak of the world.

Attempting the 8,848 meter-route without a Sherpa has its challenges – and some would call it foolhardy. Although this was my second attempt, the route was still unfamiliar to me.

Last year, in 2017, I almost made it to the summit – unfortunately, my Sherpa fell ill at camp 4. He had developed altitude sickness and needed help. I shared my oxygen tank with him and decided to accompany him to the safety of the base camp. I wasn’t sure I could make it to the summit without my sherpa. Also, if my Sherpa lost his life because of my desire to reach the summit, how could I face his family? The summit felt close, it beckoned me. Yet, an inner voice said: No, we both needed to live because life was more important than to climb Everest that season. Everest would always be there for us. I’m proud of the decision I made that day. It was a tough one, but it kept my Sherpa and me alive. 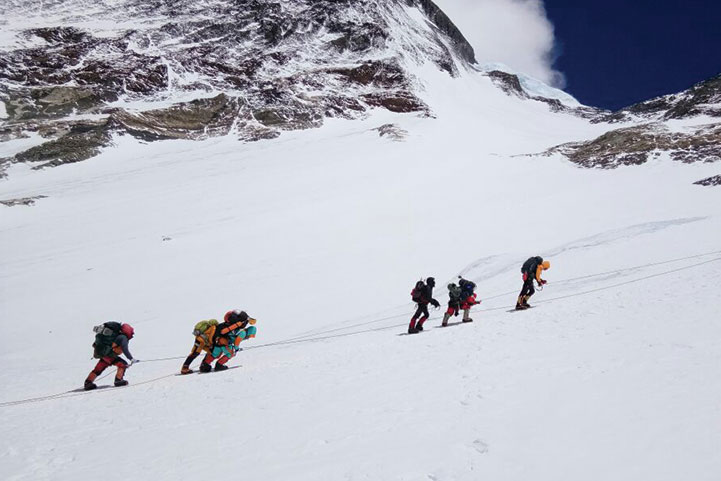 Today, this decision felt equally challenging. My friend and I decided to carry on, though we knew it could be life-threatening. I felt I had to break the jinx this time. The words from my mentor, Romeo Meetei, rang in my head, “Never give up.” Simple words, but here – high up on this dry snow desert – these words seemed more powerful than anything else.

Climbing up from camp 2 to 4 meant scaling up 1,500 meters. The air grew thinner, and the path became tougher. There were times when the climb was almost vertical – 90 degrees. The sheer physical strength required seemed daunting while the mental fortitude was even greater. On a few occasions, we had to cross narrow ravines on ladders. Might sound simple, but the sight of the sheer drop when crossing the ravine on a wobbly ladder was absolutely terrifying. I was hooked onto the safety lines, of course. One wrong step, a stray chunk of snow rolling by, the feeling of my weight pressing on the ladder – any moment could have been my last. 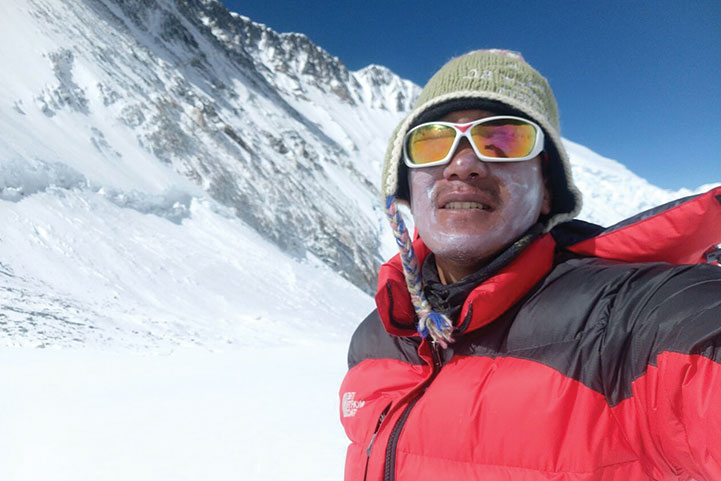 Yet, we managed a good pace and even got help from another Sherpa. I fought the urge to use an oxygen tank. I wanted to do this my way, and challenge myself thoroughly.

Climbing Everest without supplemental oxygen is putting yourself through the ultimate test. Oxygen levels at the summit (8,848 meters) are 1/3rd of sea level. The lack of oxygen can affect your mind and body. Combine that with the harsh terrain. Hallucinations, frost bites, altitude sickness – the list is endless.

The basic mountaineering course at NIMAS Dirang, Arunachal Pradesh, and advanced mountaineering course at the HMI Darjeeling Climbing Institute helped. The experience of scaling other peaks came in handy. We had climbed the 6,153 meter-high Stok Kangri in Ladakh and the 8,516 meter-Mount Lhotse and the Mera Peak (6,470 meters) in Nepal. In a way, I felt I was training all my life for this climb. From the small peaks, I conquered to reach my school when I was a young teenager to now. Yet it is for good reason that Everest is called one of the world’s deadliest peaks. 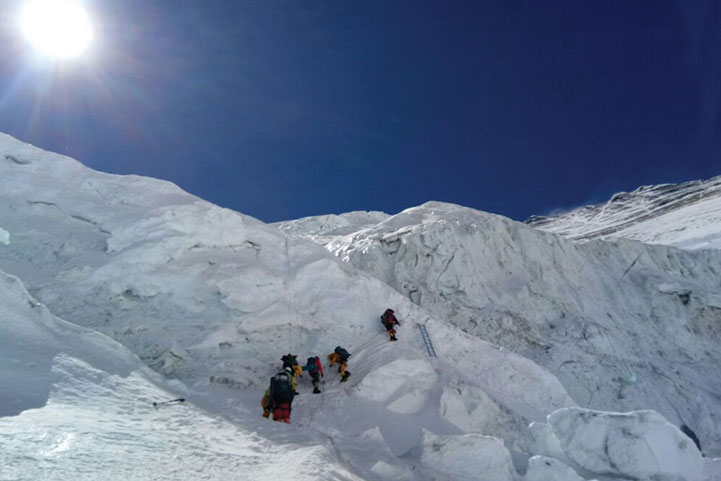 The physical strain started getting acuter, and my breath became heavier. I began taking a break every few steps to gather my strength. The Yellow Band, between 7,000-8,000 meters, was very tricky and dangerous. After 19 hours of continuous climbing, we reached camp 4. It was a spectacular sight. The view looked surreal. The stark white snow reflecting some shades of blue was a sight to behold and it was a relief. My friend and I rested there, bracing ourselves for what lay ahead. I had to force myself to keep up with the routine of heating snow and drinking it slowly. It was imperative that we consume the regular water intake of 4-5 liters per day when climbing.

I decided to rest for one night without supplemental oxygen. I knew it could be dangerous, but I wanted to keep up with the challenge because we had only two bottles each on hand. From the next day onward, I began using supplemental oxygen. We had to wait for the right weather conditions. The window to carry on up would be very tiny, and we would need to grab it wide open.

Usually, there are only a few days in May-June every year when the weather is perfect for the ascent. This is the time when one can see other fellow mountaineers who are making similar journeys – all focused on reaching the summit. Though it is heartening to see others, the weather conditions are grim. And tucked inside a bulky mountaineering suit, struggling to muster the strength to carry on – we can do little to help each other. Even when there was a strength, there were many moments of helplessness. The ascent is a quiet reminder of this. 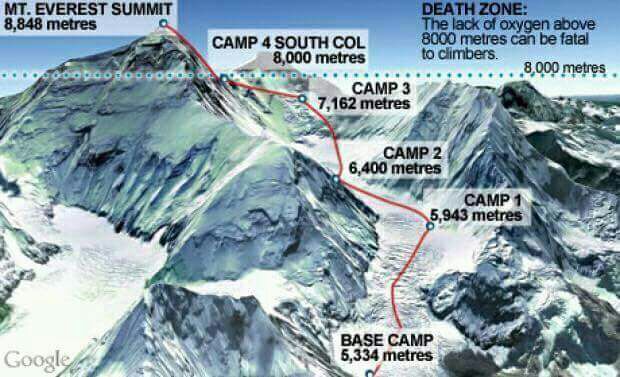 The highest 848 meters of the mountain is called the death zone. Many mountaineers risk meeting their end. We were above 8,000 meters where the air is thin and the weather, brutal. Yes, I did pass by some dead bodies – I tried not to see them too closely, or wonder about them – though, amongst the vast white snow desert, the bright mountaineering suits would stand out. My crampons scratched to a quiet halt, while those figures lay there mummified by the mountain’s weather conditions. They lay there with their complete suits while the mountain remained unconquered. Yet they had conquered the mountain too – in their own way. However, their end was cold and abandoned.

I kept focusing on my breath and used it to remove the fear and panic that would set in. I would change my mental patterns using the rhythms in my breath. For months, I had practiced the Sudarshan Kriya technique to increase my lung capacity and dispel fear. Although I was unable to practice it in this thin air, I still used the basics of breath control to help myself. And encouraged by Meetei, who first introduced me to the technique, I practiced it regularly. It had kept me in good stead. Even when I was on relatively safer slopes with softer ascent angles. Or when I climbed ahead, bent almost double with exhaustion. 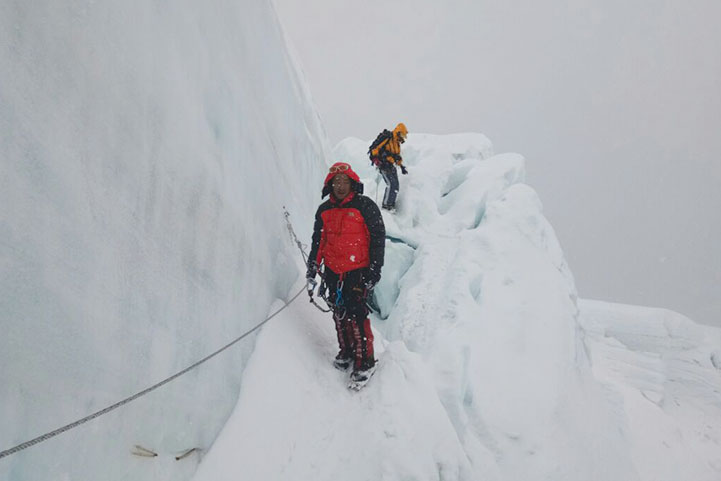 On May 23, we began the final push to the ascent at around 8 pm. Unfortunately, after walking for an hour, the other Sherpa refused to climb because of his breathing problems and experienced high altitude sickness. We took him back to camp 4. Without any support staff, and carrying the remaining two oxygen bottles each, Kishon and I decided to go for the summit. It was around 10 pm, and we kept going through the night. I was leading that day which was challenging for me. I had to deal with high-speed cold wind and clean the rope as well as clear the path. I was more experienced with climbing in higher altitudes and used all that to help Kishon: changing his oxygen bottle, feeding him warm water and high altitude food. We could see the summit and used the permanent rope to hold and guide us. The rope, the yellow light from our head torches flashing around, and an inner strength that kept fading yet growing stronger. Day broke, and I saw more figures making their way to the top. We were all lucky to be there on that particular day. Usually, there are just 12-14 clear days in the whole year that can propel you to reach the summit. And this was one of those days. 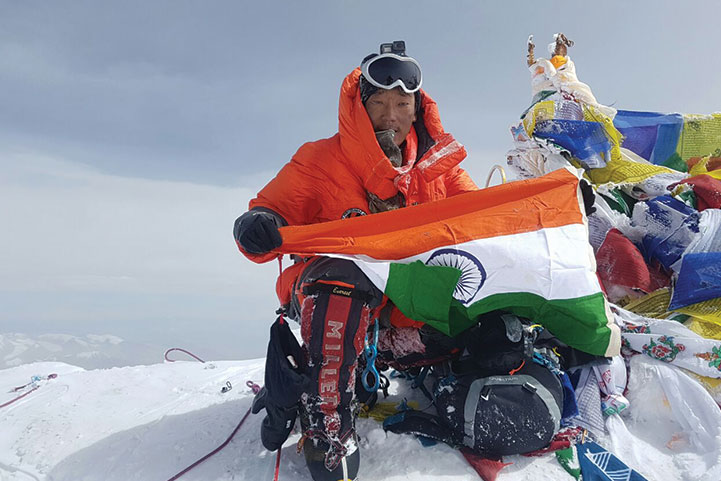 9 am, May 24: It almost felt like disbelief. Kishon and I unfurled the Indian flag. A long-awaited dream had come true. The sight from the summit was unreal – with a vast sea of clouds rolling by. Over 4,000 people had reached the peak so far, and now, my name was etched on the mountain. For eternity. I was on top of the world – literally! If I were to draw any parallels, I only knew this – it was my World Cup, and Olympic moment, all rolled into one.

Exhaustion took over the rapture, and we soon began the descent. That was tougher than one could imagine. The summit was reached. Yet it was only half the work done. Descending safely was just as critical. At that point in time, it was tough to keep focus.

Exhaustion was taking over, my backpack felt heavier, I was scared to pause for a few moments – afraid I might fall asleep. Yet, I couldn’t resist taking a small souvenir from the Yellow Band – some light yellow rocks. Kishon and I kept pushing each other to carry on – we had to make it back to base camp. And finally, we did.

As the entire experience started sinking in, I was aware that many hands and hearts were responsible for me to reach here. The director of youth affairs, my family, KDO and ABK Personnel, Rajeev Takuk, Ushi Tangu, Toi Modi and Tamiyo Taga, and The Art of Living. They were all my cheerleaders and supported my dream in different ways to become an Everester. 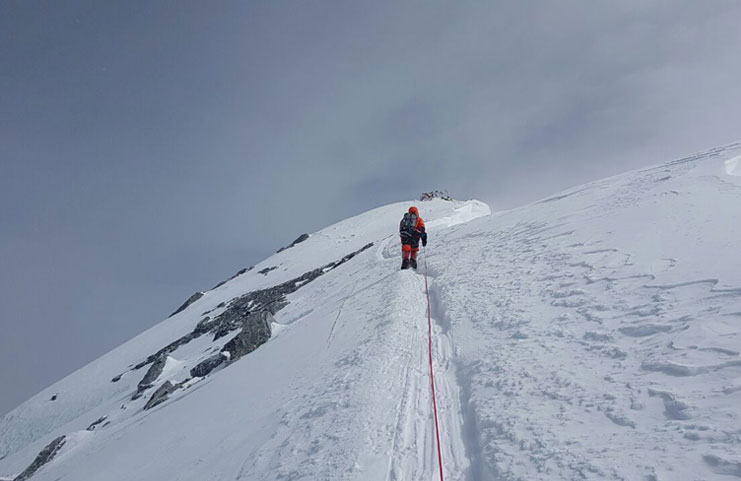 July: My parents have been quiet and not the kind to fuss over their children. When I returned from the summit, I was greeted with ordinariness. No fuss, no elation. The daily humdrum of life set in. However, when some media ventured to find me, and when people dropped by to congratulate me, my parents realized the remarkableness of my feat. And they were proud. We were even felicitated by the Governor of Arunachal Pradesh.

I’m hoping to start an adventure sports venture, which will inspire other youth to take up mountaineering. I’d like to help others like me who come from humble backgrounds but dare to dream. I want to tell such youth: Never ever give up on your dreams. If you constantly work for your dream, nobody will stop you from your goal.

It’s not like life has suddenly changed. The struggle to make ends meet is as real as it was earlier. But I have changed from the inside. I know that whatever I do, I will give my all. There is always triumph at the end of a challenge. And I’m ready for it.

The article was originally published on www.artofliving.org