Praying quietly, we hoped. It was a little uncomfortable in the dark. And it was so moist. But we needed to be in that space – and so allowed it. I couldn’t see my friend – though I tried hard to squint through the darkness. The mud was packed so well! Sometimes when a caterpillar slithered by – a tiny ray of light would come in, illuminating the walls around. I still couldn’t see my friend. Sometimes I got a peek of her head. Perhaps I was just imagining! Yet; it was so nice just to think of it. We shouted to be heard through the muddy walls – as though we were miles apart.

Sometime passed: and I heard her shout with joy! What happened? I asked. Everything alright?
I got a shoot! I’m finally growing!
So happy was I. Finally. I would soon start growing too. And together we would go beyond these muddy walls, see the sunlight!
Watch the little girl play. The one who planted us, encouraged by her grandfather. What a kind soul! Teaching his little granddaughter to plant seeds. Of hope.
I felt sad thinking about my other friends. We were the only ones to be planted. I remember straining my neck to watch my friends – yelling at them as they rolled from the paper to the dustbin with the hungry onlooking birds.
I was glad just to have another friend with me here.
As time passed by, I became sad. Why wasn’t I growing? I had heard three shouts of joy – but when would I be doing the same?

I stopped responding to my friend’s plea to talk and didn’t return her clicking sound – a secret code between us to say that all was well. All clearly wasn’t.

Then one day – just when I opened a sulky eye and continued frowning – I realized something was happening. I had grown a shoot!

I shouted and clicked madly – which she returned.
Together we kept checking on each other.
She saw the light before I did. She had crossed the mud wall.
I was happy for her, prayed that the birds didn’t get her and waited for my turn. It would come!

And one day, it did. How beautiful was that day! I could feel myself becoming stronger and stronger and breaking through the mud walls, facing the sun. I was blinded by the sudden light and had to hold myself steady. I was taller now, you see.

I waved to her. How well she looked. We both learned together. How to hold still when a human walked by. How to allow an ant to walk over our strong stem. Even some butterflies would hover around us.

The little girl had grown taller – just like us. I would always look out for her – she would play with her friends and frolic about. Time must be moving so fast. We both became taller.. and taller… Nature was kind. We withstood the seasons and the threats. I would feel bad when some of my leaves would fall – but then she would comfort me.
I prayed with her when a little boy tried scribbling his name on her still young trunk.
Yet we survived it all.

We were close to each other – not close enough to touch each yet – so close. 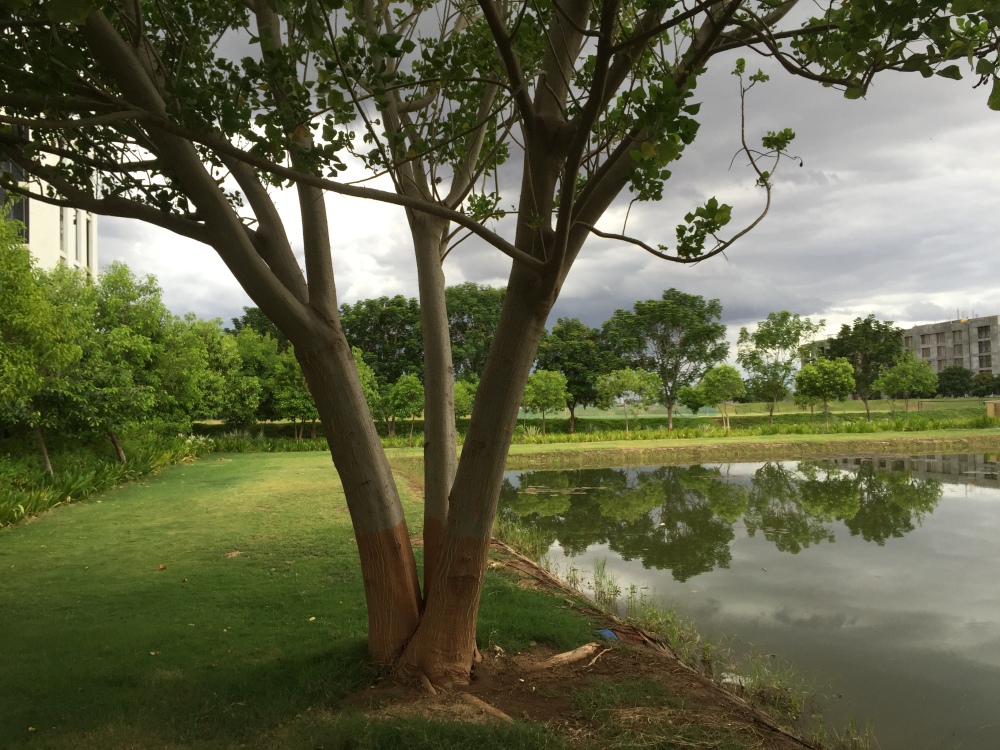 Things were changing around us.

The beautiful lake became a little smaller. And the cluster of birds too.

One of those birds started spending time with me. I loved seeing her fly around me; resting on my branches. Many days later I realized something: she chose a sheltered corner in the grooves of one of my branches and nestled there. For days. And by and by, she and her companion began selecting tiny broken twigs, tiny, broken branches to make a home. On me. I felt special. She chose me over other trees.

One day – I didn’t mean to eavesdrop, but I just couldn’t help myself –  I made a discovery: I was going to be a foster tree parent! The bird had laid smooth white eggs in that cozy little nest.I was anxious that she should feel comfortable. I prayed that the leaves would shelter them well. And one day: I heard the sweet chirping that promised new life. I wept through the day – and prayed watchfully by night. And when the time came, the little ones took their first flight from my branches. And began a new life, while, yes, visiting their old life, occasionally.
Yes, we were family. All of us.
If the flowers didn’t blossom, we would worry.
If the birds didn’t get enough food – we all would discuss it in great detail.

Our gardener was a kindly man. He would water us, keep our surroundings clean and protect us from people who wanted to hurt us.
We heard that others were not so lucky. The birds and butterflies brought us the news.
Just over our boundary wall – we could see the wall – there was nobody to care for the plants. We could see some green trees – but they were the old ones – who could look after themselves.
The younger ones started looking brown and dry.
More people started coming to where we were. New houses, students, workers.
Some were kindly, others were not.
My leaves shaded many young lovers and anxious students on many afternoons who would share their woes with me. Deep secrets that they probably felt they couldn’t tell anyone. I would tell them not to get worried. Yet they seemed not to listen. I tried comforting them by asking the wind to blow harder through my leaves. The coolness would make them feel better. Yet they didn’t seem to realize and were often dismissive.
If only you heard! There are so many secrets and friendships that time teaches us all. And these teachings are everywhere. As though scattered in the air and put there by magic.

Listen! The younger plants would. My friend and I came be known as grandparents as we would take care of the little ones. We watched them grow up in our world and make their own place in the sun. Proud, we would be when they flowered and blossomed. Disappointed, when their leaves would shed. We taught them not to compare amongst themselves, to protect one another and stay together.

Leaves continue to fall, birds continue to fly by. And we continue to stand. I was just a little seed – small enough to be pressed between the thumb and a forefinger. And here I stand today: a majestic tree, having seen many springs and many summers. Watching the world pass, experiencing the tide of time, the peaks and troughs of human emotions and yet everything changes. And deep down, in the heart of my existence, I will always remain a seed sheltered in the womb of my mother, the earth.